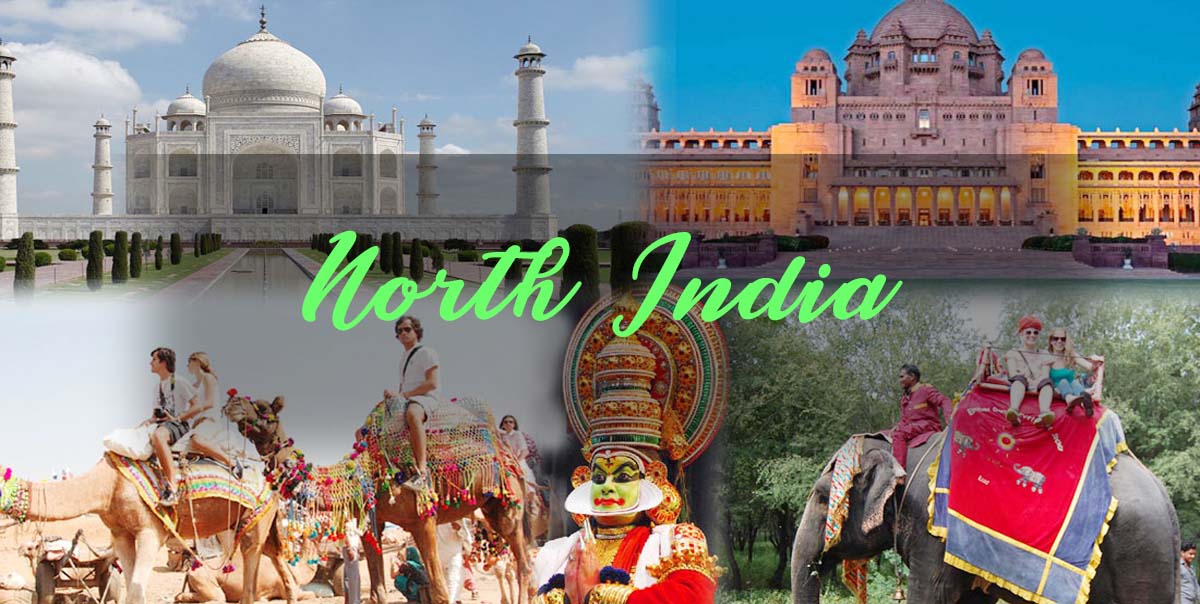 North India is a destination pulsating with extraordinary attractions. Endowed with sheer natural beauty and a rich cultural heritage, North India beckons you for a travel experience of a lifetime. North India Tour will take you to its historic, majestic and celestial destinations such as Delhi, Himachal Pradesh, Jammu & Kashmir, Rajasthan, Punjab, Haryana, Uttar Pradesh and Uttaranchal, which overflow with attractions. North India Tourism presents you fascinating attractions like world famous Heritage sites, hill stations, adventure sports, scenic beauty,cruises, wildlife and pilgrimage sites. North India is a big hit with honeymooners, adventure enthusiasts and nature lovers. Accommodation takes a whole new meaning in North India as here the options are mind- blowing. Offering a variety of choices in terms of accommodation, North India is the place where you can stay in royal palaces and experience the lifestyles of the raja-maharajas of the bygone era.

Day 01 ARRIVE DELHI:
On arrival at Delhi our representative meets you at the airport and assists you till your check in process at the hotel. Stay overnight at the hotel.

Day 03 DELHI - AMRITSAR:
Pick from Delhi hotel & shift to Delhi railway station to board train to Amritsar. On coming at Amritsar railway station, you will be received by our executive and then shift to hotel.
In the afternoon holiday Indo-Pak Wagah Border to watch Flag Retreat Ceremony - Wagah, an army outpost on Indo-Pak border 30 Km/s from Amritsar where the daily highpoint is the evening "Beating the Retreat" ceremony. Soldiers from both countries march in flawless drill, going through the steps of bringing down their respective national flags. As the sun goes down, nationalistic zeal rises & lights are switched on marking the end of the day between thunderous cheer. Back to hotel. Overnight remain.

Day 04 AMRITSAR - DELHI:
After breakfast, Start your city trip with the blessings of Golden Temple - the most important Sikh temple which is also called Mecca for the Sikhs is an alive symbol of the spiritual & historical traditions of the Sikhs. Then visit Jallianwala Bagh- where, on April 13, 1919, British & Gurkha soldiers opened fire on an unarmed taboo gathering, killing hundreds of civilians. After lunch visit Maharaja Ranjit Singh Summer Palace Museum - The summer palace of Maharaja Ranjit Singh which is located in the heart of Ram Bagh, Amritsar.
Latterly in the afternoon transfer to the railway station to board the train for Delhi. Upon coming meet with our representative & shift to the hotel. Overnight remain at hotel.

Day 05 DELHI - JAIPUR:
After breakfast drive to Jaipur. Reaching Jaipur, check in a hotel. Our representative helps you in your check in process at the hotel. The evening is free time for shopping around local market.
Jaipur is also well-known as the Pink City. It is the capital of Rajasthan, which is prominent for its majestic forts, lovely lakes, opulent havelis and sand dunes. The history of Jaipur takes us about 300 years back in time, when the Mughal Empire in India was on it is relapse. Remain overnight at the hotel.

Day 06 JAIPUR:
In the morning visit the Amber Fort. This Amber Fort was the capital of this state long time ago. Visit the Sheesh Mahal or the Hall of Victory shining with mirrors. Climb the Fort in open jeep.
In the afternoon, take sightseeing trip of Jaipur. Jaipur is the capital of Rajasthan. It was painted in pink color a century ago in honors of a visiting prince. Ever since, Jaipur has retained this pink color. Made by Maharaja Jai Singh, a prominent astronomer, this city is 260 years old. While in Jaipur, visit Maharaja's City Palace, the Observatory & Ram Niwas Gardens. Drive past the Hawa Mahal. Remain overnight at the hotel.

Day 07 JAIPUR - AGRA:
After breakfast drive to Agra. En route Agra, visit the Fatehpur Sikri. The Fatehpur Sikri was made during 1571 & 1585. It’s one of the best examples of Mughal architectural splendour at it is height. Though the city is in ruins now, it is a must visit place for all those who visit Agra. Fatehpur Sikri is a place where one should spend some quality time with family & friends. The sunset over the shambles is a sight to cherish.
Reach Agra, check in the hotel. Our representative helps you in your check in process at the hotel. Remain overnight at the hotel.

Day 08 AGRA:
In the morning visit the legendary Taj Mahal made by Mughal Emperor Shah Jahan in memory of his wife Mumtaz Mahal. This monument is completed of white marble & it took 22 years to get build.
Then visit the Agra fort. Manufactured originally as a military founding by Akbar in 1565, this red sandstone construction was partially converted into a palace during the time of Shah Jahan. In the afternoon visit Itmad-ud-daulah. This tomb belongs to the father of Nur Jahan, Ghias-ud-Din Beg. He was the Wajir (Chief Minister) of Emperor Jehangir. This white marble tomb was made by Nur Jahan between 1622 & 1628. In the evening check in a hotel. Remain overnight at the hotel.

Day 09 AGRA - JHANSI - KHAJURAHO:
After breakfast leave for the railway station to hold a train to Jhansi. Meet our representative at Jhansi Railway station & drive directly to Khajuraho, en route stopover at Orchha.
"Orchha", signification "hidden" was the hallmark of Bundela scion. The origin of Bundelas goes back to the 11th century. It’s considered that it was established by a Rajput prince who provided himself in sacrifice to the mountain goddess, Vindhyavasini. The goddess stopped the prince from sacrificing & named him Bundela (meaning the one who provided blood). The Bundelas ruled over this area between the river Yamuna and Narmada.
Next, reach Khajuraho. Check into a hotel. Our representative helps you in your check in process at the hotel. In the evening enjoy sound & light show. Remain overnight at the hotel.

Day 10 KHAJURAHO - VARANASI:
After breakfast we take you for exploring trip of Khajuraho temples. The tour is to the Eastern Group of Khajuraho temples. Morning start on a celestial note as we shall cross you to the mystic galleries of the charming temples of Khajuraho. The bold artistic statement of sensual statue and the gorgeously structured monuments will surely leave traditionary imprints on your heart.
In the afternoon leave for the airport to the catch a flight for Varanasi. Meet our representatives at Varanasi Airport. Check in a hotel. Our representative helps you in your check in process at the hotel. In the evening holiday Aarti darshan at river ghat. Remain overnight at the hotel.

Day 11 VARANASI:
In the morning take in a boat cruise at river Ganges to observe the life of passenger who pray by the Ghats of Varanasi. Next go for a trip to Sarnath, situated 10 Km East of Varanasi. It’s one of the main Buddhist centers of India. After attaining exhortation, the Buddha came to Sarnath where he gave his first sermon.
Overnight remain at hotel.

Day 12 VARANASI - DELHI:
After breakfast shifting to the airport to board the flight for Delhi. Upon coming meet with our representative & transfer to the hotel. Remain overnight at hotel.

Day 13 TRANSFER TO AIRPORT:
The morning is free time for you to ease in the hotel. Tardily in the evening leave for the airport for forward destination.